What is Green Roofing? 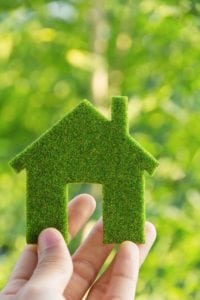 Green roofs are also known as eco-roofs or living roofs and represent one of the most efficient roofing solutions to reduce ambient temperature in urban areas. In summer, temperatures in the cities are up to 7 degrees Celsius higher than outside them, due to the heat absorbed by buildings and streets. The temperature of a traditional roof can be up to 30-40 degrees Celsius higher compared to a green roof. According to studies on climate change, cities needs 10% more green areas, if we want the urban island effect diminished.

Other advantages of a green roof

By natural bio-filtration, these roofs prevent toxins from reaching waterways.

One m² of green roof is able to absorb 5kg of CO2 per year. In addition, due to the low energy consumption, there is an extra reduction of about 3 kg of carbon dioxide each year.

Vegetation on green roofs can catch various particles such as smog and different volatile organic compounds from the atmosphere, with a positive effect on the quality of the air and the health of the inhabitants.

Talk to top quality San Jose roofing company experts to see if a green roof is right for you.